Sylvia Begaye works on miniature rugs that become part of the clothing worn by her dolls.

Phoenix, AZ I wish I could include a picture of each of the weavers at this year’s event, but I just couldn’t visit with everyone and still attend the afternoon lectures that I wanted to go to.  I did get a chance to talk with Sylvia Begaye, a noted dollmaker who incorporates hand woven textiles into the clothing worn by her creations.  In the picture above, you can see that two of the dolls are wearing Chief Blankets and the seated weaver doll is wearing a handwoven sash belt.  Sylvia lives in Ft. Defiance, AZ and frequently takes her dolls to the Crownpoint Rug Auction.  You won’t find Sylvia’s work in the auction itself; she sells the dolls in the hallway outside the gym where the auction is held. 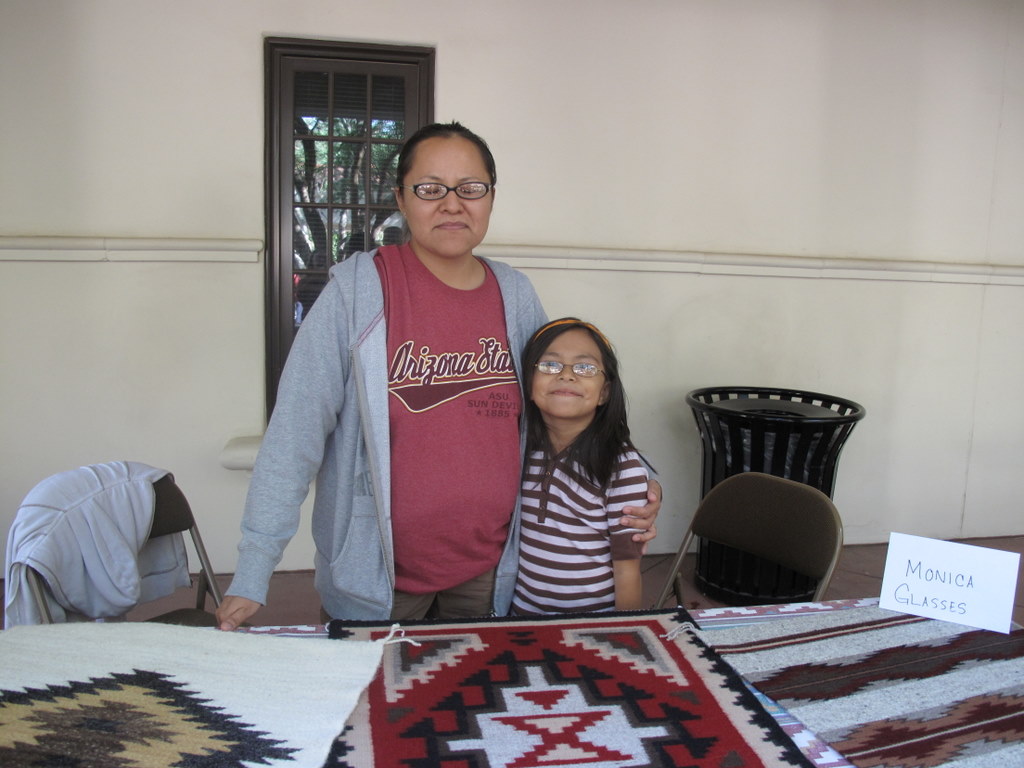 Monica Glasses and her daughter with some of Monica's work in center and at right. A rug by Monica's mother, Nellie is at left.

Nellie Glasses, who is one of my favorite weavers, wasn’t able to make the trip to the Heard from Rough Rock, AZ, but her daughter Monica Glasses was there with her daughter, aged 7.  Monica’s daughter was non-committal when asked if she was going to learn to weave, but she was clearly proud of the work that her mother and grandmother do.  One of Nellie’s handspun and handcarded pieces is at left in the picture above and Monica wove the Ganado Red in the center and the Chinle design at right.  I hope to see Monica at the Pueblo Grande  Auction later this month.

Jackson Clarke of the Toh Atin Gallery in Durango, CO discusses the development of design in Navajo weaving.

After a delicious lunch in the Heard cafe, it was time for a talk on rugs by Jackson Clarke of Toh Atin Gallery in Durango, CO.   Jackson discussed the development of design in Navajo weaving and showed many examples.  The Transitional Eyedazzler that he ‘s holding in the picture above is woven with Germantown yarns and dates into the 1880’s, a time when weavers were, with one of two exceptions, anonymous.  Rugs, even when they won prizes, were associated with a trader rather than a weaver, a practice that lasted into the 1930’s.  As time has gone on, weavers have increasingly differentiated their work and developed artist centered markets for it as collectors seek out pieces by D.Y. Begay, Roy Kady or Morris Muskett.   Jackson used Helen Begay’s work as an example.  Helen and her family, building on a multi-generational weaving tradition have devekoped a distinctive pictorial  style called a Burnham rug.  You can see one of Helen’s rugs, titled “Cruising the Rez in My Ford Truck”, in the picture below.  As much as any painting of piece of sculpture, this is a carefully composed, titled and realized work of art.   And the wool is mostly hand spun.

Helen Begay's "Cruising the Rez in My Ford Truck"

Mark Winter of Toadlena Trading Post followed Jackson’s talk with a discussion of his work in the Two Grey Hills area of New Mexico.  Mark has been very successful in documenting not only the development of weaving patterns and techniques but the weavers and their lives and families.  His book on the subject, a culmination of 20 years of research, will be published in May of 2010 in time for an exhibition on Two Grey Hills weaving at the Wheelright Museum in Santa Fe.  Mark never, ever does anything halfway and I’m definitely going to add his book to my library when it’s published.  In true Mark fashion, he had a 130 weft count Daisy Taugelchee tapestry with him and graciously walked the piece around so that every audience member who wanted to could touch and appreciate Daisy’s work up close.  Mark also talked about the development of design and artistry and display and striking pictorial piece by Pamela Brown depicting sisters united under the sun and moon, even when they are separated by great distances. I had hoped that I’d have time to visit with some more of the weavers, but Mark’s talk went over the time limit and was so fascinating that no one noticed.  When I left the auditorium, the museum staff was cleaning up the courtyard and I was vowing that next year I’d get to more of the weavers, especially the new ones.  The Heard has scheduled next year’s Gathing of Weavers for Saturday, November 6.   I’ll see you there!